A rambunctious young blue point, thanks to Barbie from Sinhiman Birmans for letting me keep him from the matting between her lovely tabby girl Cloud and my man Massimo. He has great pedigree with several Gold Dbl Gr Ch in his lines.  Still growing and getting bigger by the week he is going to be a big strong lad, he tries to help but omg its like having a 2 year old again he’s lucky he’s so cute.   Claude started off his showing career as a kitten and is now Grand Champion.

“Obi”  – CH Eclair Oberon
It is so exciting to be adding Obi to my breeding program, he is a cream point so will produce Tortie point girls and cream point boys.  I can’t wait to see his kittens early next season.  Became champion at his first show.
Thanks Rosalind for letting him come to us.

A lovely older gentleman who has come to me to continue on his legacy.    A chatty, snuggly chap who loves a good belly rub.  Xan comes from a long line of award winning champions and will hopefully produce a couple for me too.  He is Saphire, Millie and Xande’s dad.  Thanks so much to Christine for trusting me with him and  Rosemary Wilson for allowing him to come and continue on her years of hard work.  Xan retired at the end of the 2018/2019 season after many years of fantastic kittens for a well deserved life of relaxing in the sun on the farm.

A very smoochy blue point and happy to be the King of the Castle.  With a great personality he is always into something, loves to “help” hang out the washing and has a lot to say for himself with his friendly meow.  He has a beautiful long tail and great markings that pass on well to kittens. He has some great lines in his heritage including his grandad DblGrndChNicshaJazperzRhapzody (Aust Imp), thank you to Margaret Sutton for helping me start off as a breeder by allowing this fantastic boy to come to me. 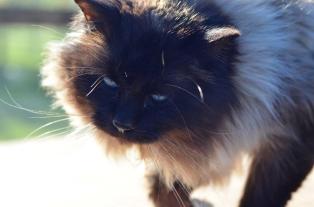 A wonderful seal point gentleman, he has a quiet disposition most of the time, apart from when he thinks he’s missing out on something he’s happy to let you know he’s there. Loves to spend his day basking in the sun. He has joined us as an experienced boy and is Lila and Indi’s Dad. He has an established heritage and a long list of progeny. 2017-2018 season will be his last breeding season before he retires so he can enjoy the rest of his life as a pet.